Rating the Novels of Agatha Christie

A Jupyter Notebook of this article is available here.

The website goodreads.com lets readers rate books on a scale of 1 – 5 and also reports a "score" for lists of related books, according to some undisclosed algorithm. For the novels of Agatha Christie, a list can be seen here. Goodreads has come in for some criticism for its poor user experience, and certainly it isn't always clear what to make of its ratings.

This article will use pandas to anaylse and compare the ratings and scores given to Agatha Christie's novels on Goodreads with the reviews on the excellent podcast, All About Agatha. These reviews result in ratings for plot mechanics, credibility, setting, etc., along with deductions for the any of the more egregious racism, anti-semitism, and all-round crassness that her novels occasionally display.

The file ac-ratings.csv lists the Goodreads ratings and scores along with the All About Agatha ratings in comma-separated format. Every Agatha Christie novel (apart from the execrable Passenger to Frankfurt) is listed from Goodreads. At the time of writing, the podcast (which reviews the books in chronological order) has reached Cat Among the Pigeons (1959) with 15 novels to go.

First take a quick look at the CSV file:

The first two lines are the header: the first three columns are the book title, year of publication and novel series (Miss Parple, Poirot, etc.); the next eight columns relate to the rankings given by All About Agatha, with the total rating in the last of these columns; the next four columns are the score and rating statistics from Goodreads.

Reading in this file is straightfoward with pandas' read_csv routine. We will set the index to be the book title and take column names from the header in the second line.

With the DataFrame in this form it is easy to obtain some simple metrics. First, the top-rated novel:

The 10 books with the most credible plots (according to All About Agatha):

The 10 books with the most ratings on Goodreads:

It is often claimed that Agatha Christie's novels get worse over time. We can plot the rating against publication year, but perhaps should exclude Curtain and Sleeping Murder, which were published long after they were written. 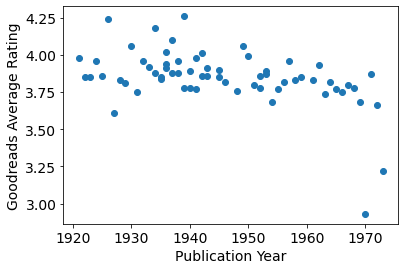 Two things are interesting: there appears to be much more variation in rating for Christie's novels of the 1920s and 30s, and there does seem to be a decline over time (even discounting the two outliers towards the end of her career (Passenger to Frankfurt and Postern of Fate). Charitably excluding these outliers, we can perform a linear regression: 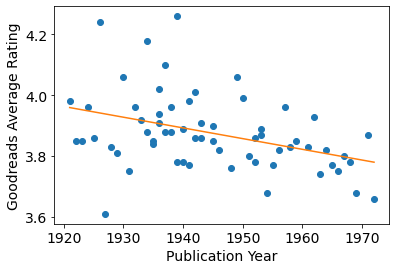 As can be seen from the above plot, the regression coefficient is negative:

If Agatha Christie were writing books today, her average Goodreads rating could be expected to be:

(about the same as Fifty Shades of Grey, as it turns out).

Does the number of ratings on Goodreads correlate with the ratings themselves? 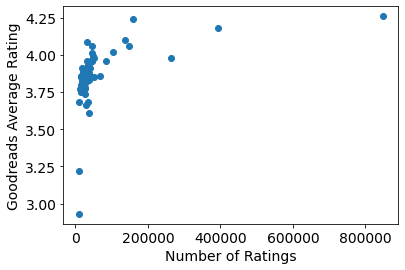 Yes, but in a rather non-linear way: the best novels get orders of magnitude more ratings than the others. The cleanest way to visualize these data is to take the logarithm of the number of ratings, therefore: 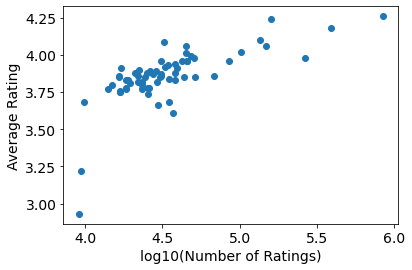 pandas' powerful groupby function can analyse the novels by grouping them in different ways.

For example, the number of novels published each year: 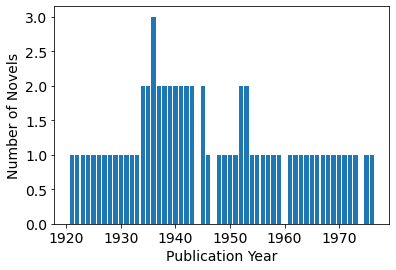 The DataFrame can be grouped on the "Series" column to count the number of novels featuring each detective:

The same GroupBy object can by used to find the average rating within each novel series:

Which is the better Goodreads metric of quality, the Average Rating or the "Score"? One way to answer this is to compare with the rating given by the All About Agatha podcast (assuming this agrees with either of them). To compare ratings, we can rescale the AAA Total by a factor of 1/10, since the maximum rating they give is 50. 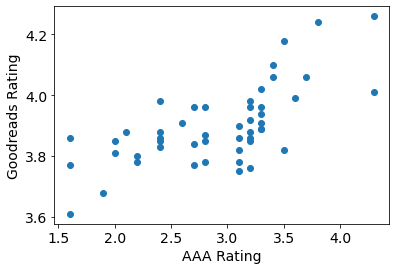 The All About Agatha podcast is clearly harsher, on average, than the Goodreads rankers: this is to be expected: they are reviewing the novels systematically whereas the drive-by punters of Goodreads are more likely to provide a rating when they enjoyed a book (and may not even finish a book they don't enjoy). However, there is a pleasing trend with the following correlation coefficient:

To compare the AAA ratings with the Goodread scores, it makes sense to take the logarithm of the latter: 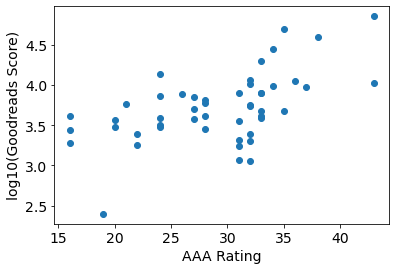 The correlation seems less strong: apparently the wisdom of the crowds is not improved by whatever algorithm Goodreads uses to generate its Score metric.

There are currently no comments