A set of points drawn from a uniform distribution on a two-dimensional domain typically display clustering: 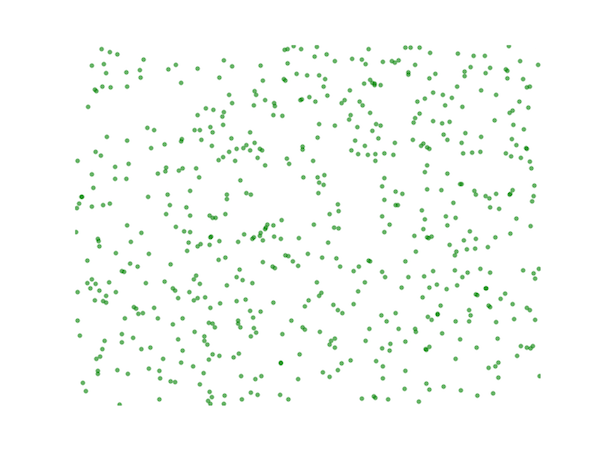 For computer graphics applications, it is often useful to obtain a sample of random points such that no one point is closer than some pre-determined distance from any other point, in order to avoid this clustering effect. This type of distribution, with no low-frequency components is sometimes called "blue noise".

A popular approach for obtaining non-clustered random sample of points is "poisson disc sampling"; an efficient ($O(n)$) algorithm to implement this approach was given by Bridson (ACM SIGGRAPH 2007 sketches, article 22)[pdf].

In a two-dimensional implementation of Bridson's algorithm, the sample $\boldsymbol{\mathrm{R}}^2$ domain is divided into square cells of side length $r/\sqrt{2}$ where $r$ is the minimum distance between samples, such that each cell can contain a maximum of one sample point. The sample points are stored in a list of $(x,y)$ coordinates, samples. The grid of cells are represented by a Python dictionary, cells, for which each key is the cell coordinates and the corresponding value is the index of the point in samples list (or None if the cell is empty).

We start by selecting an initial sample point (drawn at random uniformly from the domain), inserting it into samples and putting its index, 0, in the corresponding entry in the cells dictionary. We also initialize a separate list active with this index.

While the active list contains entries, we choose one at random, refpt, and generate up to $k$ (say, 30) points uniformly from the circular annulus around it of inner radius $r$ and outer radius $2r$. Any one of these points which is no closer than $r$ to any other in samples is "valid" and can be added to samples and active. We only need to check the surrounding cells in the local neighbourhood of refpt. If none of the $k$ points is valid, then refpt is removed from the active list: we will no longer search for points around this reference point.

Mike Bostock gives a nice animated demonstration of the Poisson disc sampling algorithm on his website.

Below is my Python code for Poisson disc sampling using Bridson's algorithm; a typical output is shown here: 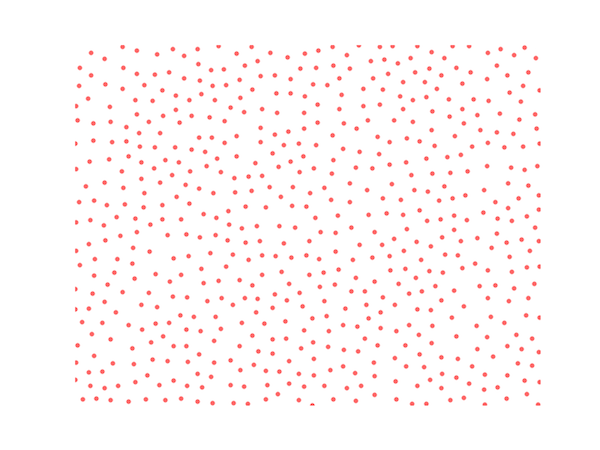 Please see the next post for an object-oriented approach to this algorithm.

This code is also available on my github page.

I know this is an old topic but it's just what I was looking for to generate a random field and it runs 10x faster than a pure python version I am currently using. You ought to put this on Github if not already (I couldn't find it)

Thank you – I should probably get round to doing this. At the moment my github account is a bit of a graveyard.

I've added the code from this article to my github page now: https://github.com/scipython/scipython_maths/tree/master/poisson_disc_sampled_noise

Thanks for this article, however we noticed two (minor) things one could possibly improve/do differently here:

1) To sample in the annulus uniformly you'd have to compute 'rho' as:

2) Shortly after that line: when a point falls outside the domain you 'continue' and therefore don't increment 'i' in that iteration. This grants points near the boundary more attempts, but there is no reason to do that.

One could however think about constraining the sample space of boundary points to the part of the annuli that lies in our sample space and then sample with a fraction of k, for example:

When a point lies exactly in a corner, only a quarter of its annulus is inside our rectangle and k/4 sample attempts could suffice - not sure how much of a speedup that would give us, but it goes to show how in the current setting the number of sample attempts should be the same for all points.

I know this is an old topic, but one of the first results that pops up when looking for an implementation of Poisson Disc Sampling, so maybe someone sees and appreciates this.

Hello Julian,
Many thanks for these improvements: the uniform sampling issue I should have caught already! I'll update the GitHub repository too.
Cheers,
Christian