Measurements of the electron charge over time

Why didn't they discover the new number was higher right away? It's a thing that scientists are ashamed of—this history—because it's apparent that people did things like this: When they got a number that was too high above Millikan's, they thought something must be wrong—and they would look for and find a reason why something might be wrong. When they got a number close to Millikan's value they didn't look so hard. And so they eliminated the numbers that were too far off, and did other things like that ...

He doesn't provide a citation for this, but the anecdote has become a standard example of confirmation bias and other psychological effects in scientific methodology.

This question on the StackExchange site History of Science and Mathematics has attracted some answers with scatter plots of the reported value of $e$ over time, but some of the citations are hard to track down or behind paywalls when they can be located.

The Python script below reads in the text file e-history.txt which summarizes the references I have been able to obtain, and plots the following graph in which the reported values and their uncertainties. These values are colour-coded according to the method used in the reporting article: in the first half of the 20th century the two main methods were oil-drop experiments like Millikan's (in)famous experiment or based on X-ray diffraction. By the 1940s the scientific consensus had settled close to the modern value, which (since the 2019 redefinition of the SI base units) has been fixed by definition as $1.602176634\times 10^{-19}\;\mathrm{C}$. 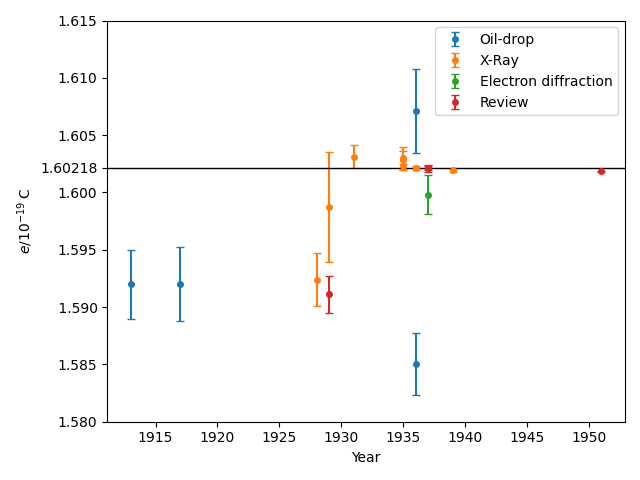 The two data points from 1913 and 1917 are the original results found by Millikan, who has been accused of cherry-picking his data to reduce their reported uncertainty. Overall, the oil-drop experiments are the least accurate, mostly because of uncertainty in the value of the viscosity of air. Undoubtedly, the researchers reporting these experiments underestimated their errors.

Discounting the review article by antisemitic physical constant-botherer Raymond Birge, there are really only two non-oil-drop experiments that seem tied low to the Millikan value, and one of those has an error bar that overlaps the modern value. By the 1930s it was well accepted that the X-ray experiments provided a more accurate value for $e$.

There are currently no comments