Analysing Snakes and Ladders as a Markov Chain

The game of Snakes and Ladders is a good candidate for analysis with a Markov Chain because of its memorylessness: at a given point in the game, the player's progression from the current square is independent of how they arrived at that square.

In Markov Chain theory, the probability of a move from square $i$ to square $j$ is given by a transition matrix, $\mathbf{T}$. First consider a board with 100 squares and no snakes and no ladders. The player starts off the board, in a square we number 0, so the transiton matrix has dimensions $101 \times 101$, where we label the rows $i=0,1,2,\cdots 100$ as squares to move from and columns $j=0,1,2,\cdots 100$ as squares to move to. The first row the transition matrix therefore represents the probabilities of moving to each square from square 0, the start; the second row represents the probabilities of moving to each square from square 1, and so on. The moves are decided by the roll of a fair, six-sided die so the first few rows of the transition matrix in this case look like:

Some people play Snakes and Ladders with the requirement that, to win, the player must land exactly on square 100, but those of us who don't feel the need to prolong the game any longer than absolutely necessary allow anyone with a roll that lands on or passes 100 to win. This will change the probabilities in the transition matrix for squares 94–99. For example, from square 97, a roll of 3,4,5 or 6 is sufficient to win. The bottom row of the transition matrix will be full of zeros because there is nowhere to go from square 100.

Hint: The probability of arriving on the "From" squares above may be set to zero and added to the corresponding "To" square.

The following code analyses Snakes and Ladders without the snakes or ladders: 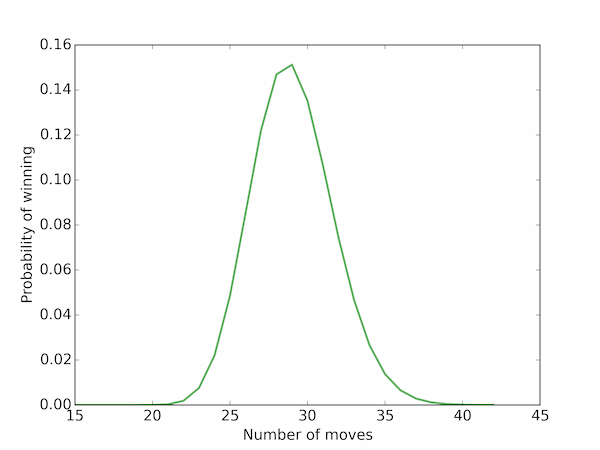 The snakes and ladders are added as a list of tuples indicating which squares are joined. Note that the square on which a snake or ladder originates doesn't really need to be included in the transition matrix (since the player can never occupy these positions), but here we keep them for simplicity. 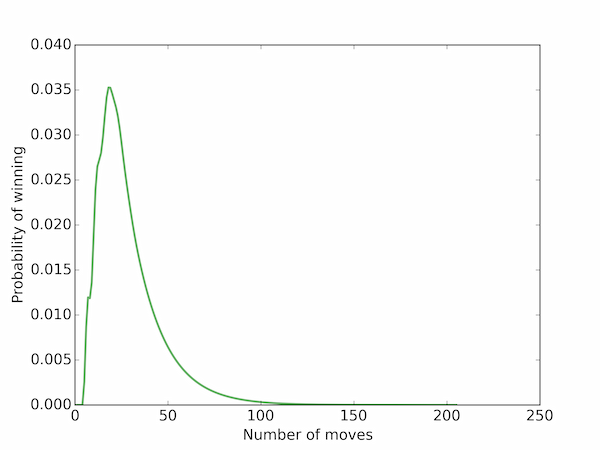